Superman and Other Famous Adoptees 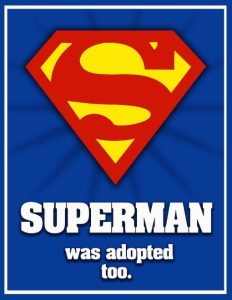 Did you know that your adopted child has a lot in common with a comic book character who dresses in a stretchy blue suit and a red cape and flies? That’s right. Your child and Superman have a lot in common. They were both adopted. When we first talk to our children about adoption, we use very positive language in order to reinforce positive feelings about adoption. In fact, I have observed some adopted children who feel so positive about the fact that they are adopted, that they want to tell the world!

As the child gets older and approaches school age, though, they begin to realize that joining one’s family through adoption is not the way most people come into a family. And they also realize that the kids in school do not react like their parents do when talking about adoption.

This is an important time for parents to help their child understand that being adopted is not so strange or unusual. If there are other children in his class that you know were adopted, mention that to him/her. Invite another adopted child over to play. Having that special bond between to children may develop into a special friendship. Pointing out to your child that there are a lot of famous people who were adopted may help as well.

Here is a partial list of famous adoptees to get you started:

And here are some famous adoptive parents that you may not have known about:

Note: Information for this article was obtained from the National Adoption Information Clearinghouse.