Learning to Use Positive Adoption Language 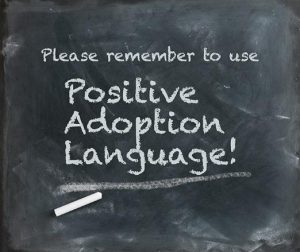 I am sure all of you will agree that when we talk about adoption with our children it is very important that the language we use be positive and that it promotes good feelings about adoption. Keeping that in mind, I find it somewhat surprising that so much of the public, and some adoptive couples as well, are still using language that is out of date and who may, without realizing it, be promoting negative feelings and attitudes about adoption. Below are some examples:

1) “The natural mother had blond hair.”

Does this mean that we, the adoptive parents, are the unnatural ones? A better term would be the birth mother or the biological mother.

This phrase dates back to the 1890’s when orphans were put on trains in the northeast and taken south and west to find homes for them. Each time the train stopped in a city or town, the children were told to stand on boxes or on a platform so that the people could view them. They were literally put up for adoption. Obviously, this is not true today. It would be better to say that the birth mother “made an adoption plan.” That indicates that the adoption was a voluntary and deliberate decision and that a lot of thought and planning went into it.

I feel it would be better to say, “My child was adopted.” By putting the verb in the past tense, you are referring to a legal process that occurred when the child was about six months old. If you say is adopted, you are implying that there is still something very important about the adoption. You are more or less labeling the child and it may cause him to think there is something song with him.

These are just a few suggestions of what we can do to help educate the public about adoption. We have a monumental task to change the old ideas and attitudes about adoption, but it is a start by using language that conveys positive emotions and attitudes. Good luck and think positive!